Roles Of Bears In Norse Mythology: An Insight For Enthusiasts

You think it’s odd that there are hardly any bears in Norse mythology? If that happens to be what you have in mind, check out this article.

Generally speaking, all kinds of animals could be found in Norse mythology such as ravens, wolves, snakes, boars, horses, goats, ... But surprisingly, it’s quite tough to locate instances of bears in various myths that pass down the Nordic peoples. While the carnivoran mammals indeed show up in a lot of sagas and poems, they rarely appear in Norse mythology. Considering the fears as well as respects that Scandinavians have toward them, many find the near-total absence of bears in Norse mythology somewhat puzzling.


So you want to hear what researchers have to say about bears in Norse mythology? If that is so, you come to the right place. Down below, you would be provided with pretty much everything that enthusiasts must keep in mind regarding roles of bears in myths of the Scandinavians.

The Preferred Disguise Of Gods

During visits to the human world, Odin as well as Thor often take on the appearance of bear as disguise. Therefore, bears tend to be looked upon as the forefathers of man in ancient times. Bears symbolize wisdom, strength and healing that bring balance to seen and the unseen world. While the male bears usually represent masculinity, the female ones serve as symbols of femininity. All in all, the most notable contributions of bears in Norse mythology happen to be ingredients (sinews) for a leash (Gleipnir) that keep Fenrir restrained.


Who Exactly Is Fenrir Anyway


Fenrir is one of the children of Loki and the giantess Angrboda alongside Jörmungandr as well as Hel. Through prophecies, Odin knew that these siblings would bring forth great disasters so he sent the gods to gather them. After Fenrir, Jörmungandr, and Hel arrived, Odin threw Jörmungandr into the seas that surround all lands and threw Hel to Niflheim while granting her authority over nine worlds. As for Fenrir, the Aesir kept him around and Týr, son of Odin, is the only one with the courage to feed the wolf food.


Why Fenrir  Must Be Restrained


Over time, gods of Asgard noticed that Fenrir was growing rapidly every day so they promptly came up with a plant to restraint the wolf. One day, the gods brought Fenrir to an island in Kattegat and asked him to play a game in order to show his monstrous strength. Namely, the gods would bind Fenrir to a rock using a leash and he must break free using his power.  The gods also promised Fenrir great fame if he successfully frees himself from their leashes.


After seeing the first leash, Leyding, Fenrir was certain that it’s unable to contain so he let the gods bind him to the rock. With a single strength, Fenrir broke himself and shattered Leyding into pieces in the process. Shocked but undeterred, the gods proceeded to bring forward another leash called Dromi which was twice as strong as Leyding. Like the first time, Fenrir knew that the leash would definitely fail to restrain him so he allowed himself to be bounded to the rock. Again, by stretching his legs, Fenrir got out without trouble.

At this point, Odin sent Skírnir to the black elves world to find dwarfs that could put together a stronger leash to contain Fenrir. The dwarfs then finished and presented to Odin a leash named Gleipnir which was as light as silk ribbon but stronger than an iron chain. In order to make Gleipnir, the dwarfs used six ingredients:

Upon seeing Gleipnir, Fenrir said that breaking out of this leash would bring him no fame. After that, the gods proclaimed that if Fenrir wasn’t confident enough to break Gleipnir then he is not mighty enough to cause them concerns so he would be freed. Fenrir then responded that if the gods doubt his strength and courage, he would let them bound him to the rock using Gleipnir. Still, there was a condition: One of the gods must put his hand in to Fenrir’s mouth. While other Aesir looked at each other nervously, Tyr put his right hand directly into the wolf jaw.


What Take Place After That


Once Fenrir was firmly bounded by Gleipnir, he attempted to break free but the more he stretched, the tighter the leash became. Realizing that he has been tricked by the gods, Fenrir bit off the right hand Tyr but that was all he could do. Until Ragnarok takes place, Fenrir would be restrained by Gleipnir. 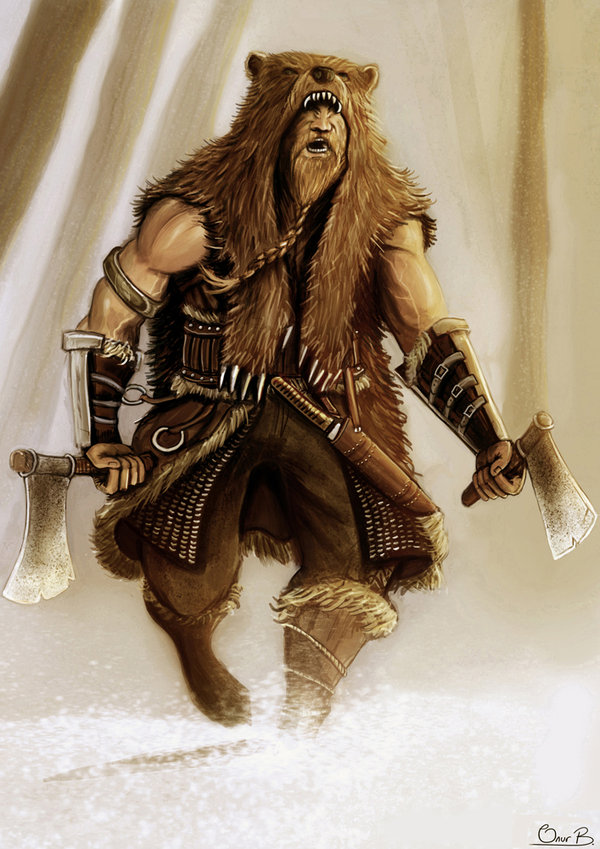 All things considered, bears in Norse mythology don’t have the central roles but the carnivoran mammals still influence literature works in the Norse world. Writers of Nordic sagas use bears as well as a symbol of bears on multiple occasions.